Who Narrates The World?

For the last three years, The OpEd Project has conducted a Byline Survey to get a sense of who is getting heard in public discourse.  We are primarily interested in the ideas and the individuals that are driving resources and talent, public policy and opinion.  In other words, we are interested in who narrates the world.  On a practical level we are interested in commentary forums because they predict leadership and thought leadership at the highest levels in all fields.  We see commentary as the beginning of a larger conversation about influence.

Over the last few years we have explored demographic data including gender, race, education, and income level.  The following are the results of our most recent research, which evaluated over 7,000 opinion articles in 10 media outlets over a 12 week period from 9/15/11 to 12/7/11.  We categorized articles by media type (New, Legacy, College), publication, the author’s status as staff or not staff, and subject.  This current release of data focuses in particular on gender.  After all of that hard work, I’m glad to say that we have some fascinating results to share with you.

The table below shows the proportion of total articles written by women in New Media (The Huffington Post and Salon), Legacy Media (NY Times, Washington Post, LA Times, and the Wall Street Journal), and College Media (Columbia, Harvard, Princeton, and Yale).   As you can see, women were far more active in New Media than in Legacy Media (33% vs 20%).   This was expected because, in general, women are more active online than men are.  If these numbers are depressing, be heartened by the 38% contribution of articles by women in College Media. 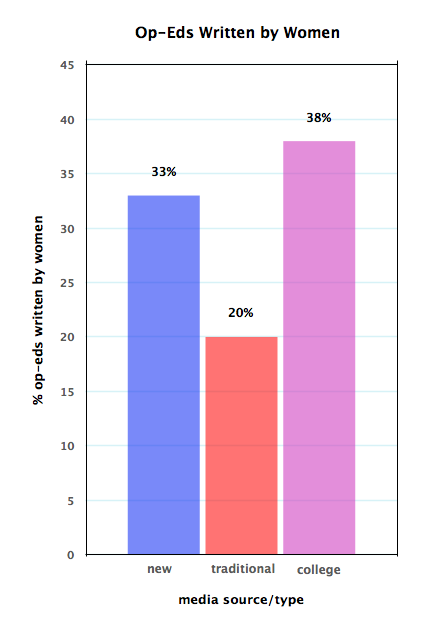 The good news is that we have seen major improvements in women’s op-ed writing in the last 6 years (and notably in the last 4.5 years since The OpEd was founded).  Overall we have seen approximately a 6 percentage point increase in some of the nation’s top commentary outlets in traditional media.  This represents a 40 percent increase for women compared to women’s representation 6 years ago.  For three specific data points, when comparing the 2012 Byline Survey to Howard Kurtz’ and James Rainey’s numbers in 2005 (1)(2), we see increases of 5 percentage points in the New York Times, 9 percentage points in the Washington Post, and 4 points in the LA Times. 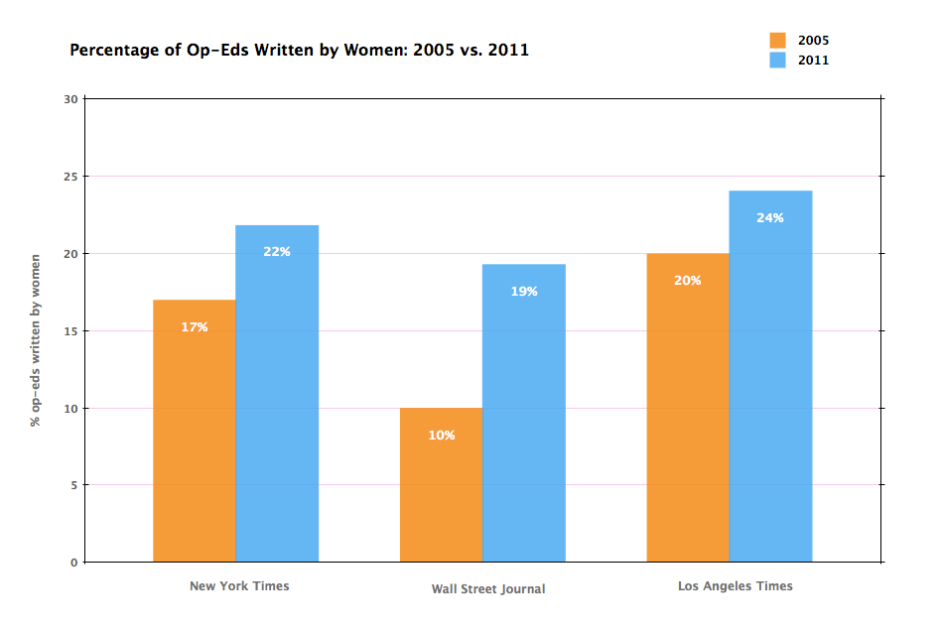 These are extraordinary improvements that should not be glossed over.

We should also be heartened by the increase of women’s presence in new media opinion forums.  It has been much remarked that the internet and the new media landscape has a democratizing effect: there is a potential for many new voices to be heard, including more womens voices.  However, when we begin to unravel these basic statistics things become much more complicated.

Who is Writing What?

New media dynamics allow us to choose information and produce information in our own images — and this has a particular significance to women.  As you can see in the charts below, in both legacy media and new media, women authored far more articles on subjects that women have traditionally written about (we call them Pink Topics), and significantly fewer than men on every general interest subject aside from the subject of health in new media (women wrote 53%).

Before going any further, I must point out that we don’t consider “pink” topics any less important than general topics.  We are simply isolating this content in an attempt to gain a better sense of how women are contributing to the general public discourse and to observe the extent to which women have broken out of the pink silo that they have historically been confined to.

In new media, women wrote proportionally far more of the pink articles than they did in legacy media (e.g., 40% of food articles in legacy vs. 67% in new media), but women also wrote a higher proportion of articles on every other subject, with the exception of national politics, which was 20% for both new and legacy media. 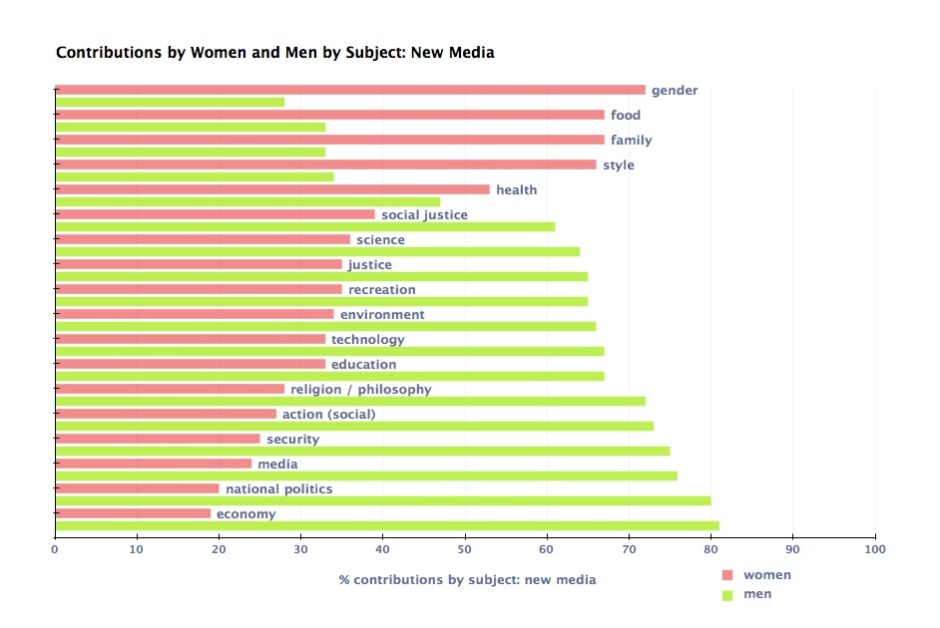 Some of the numbers in legacy media were especially dreary.  The worst, in my mind, was that just 11% of economics articles in legacy media were written, or co-written, by a woman.  In new media, that number was a less grim, but still sad, 19%.  It’s true that this number is, at least in part, a result of a higher number of men in economics.  In fact, only 9% of economics doctorates were awarded to women in 1974, but the number has been steadily on the rise, reaching 32% in 2003.  Not only is this 11% figure not representative of women in general, but it is not representative of women in the field of economics. (3) 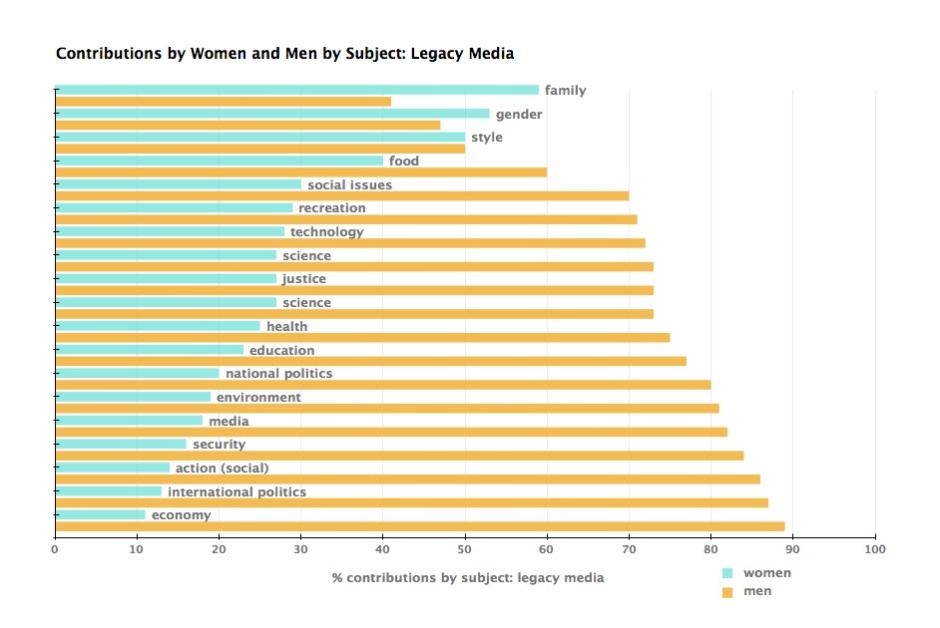 In New Media, women wrote 33% of all articles, but they contributed just 26% of all general interest articles.  This is due to the fact that 34% of the articles that women wrote about were on Pink topics. (*)

In the Legacy Media chart below, we see that the numbers of Pink topic articles are nearly equal (men 34, women 37), but these numbers belie the disparities in the distribution of output.  The 34 articles that men wrote constitute just 3% of their total output; compare that to the 12.4% that Pink topics composed in women’s total output. 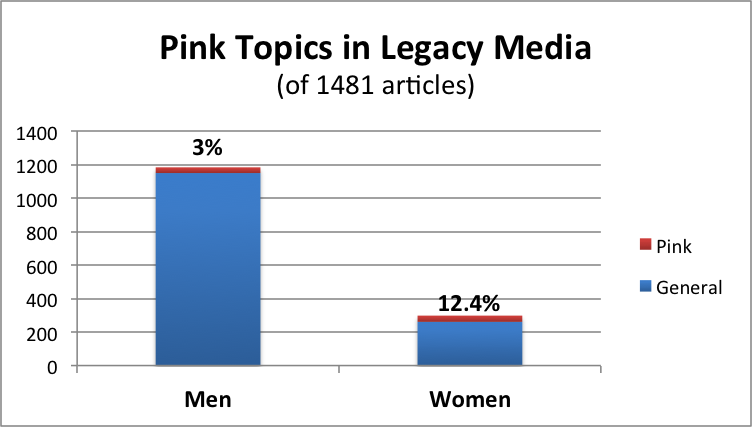 New Media proved to be a bit different, in that there were significantly more women writing, and even though they wrote a higher percentage of Pink Topic articles, they also wrote a higher percentage of general interest articles.  In the New Media outlets that we documented, 34% of women’s writing was on Pink Topics.  When we remove for that subject area, we find that, even though women composed 33% of all articles in New Media, they contributed just 26% of general interest articles. 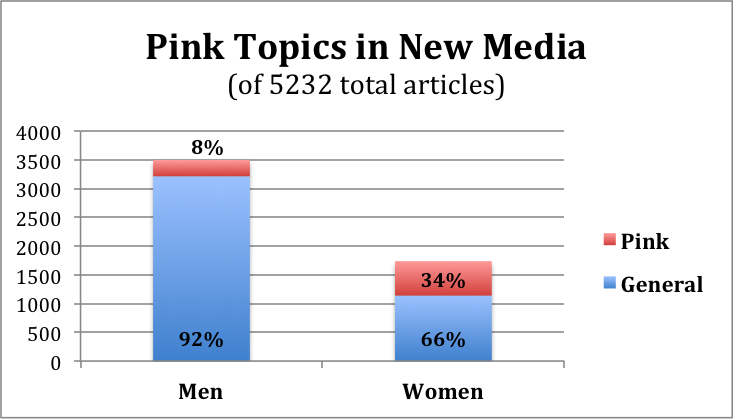 Ever wonder how op-eds fit into the broader news-media world?  I do.  So, to prepare for the Byline Survey final results, I felt the need to get a better sense of the broader news media environment and the ways in which op-eds are situated within it.  Today we’ll take a look at statistics on the production and consumption of news in legacy and new media.

On the production end of the news I tried to answer these questions:

– What are they writing about?

– Who is playing what role (experts, spokespersons, or sources)?

Each year the American Society of Newspaper Editors conducts a survey of newspaper staff demographics.  In 2011, 847 of 1,405 daily newspapers (58% of the national total) responded to this survey. The report revealed significant disparities in race and gender.  According to this report, “441 newspapers responding to the ASNE census had no minorities on their full-time staff”.

Below is the demographic composition of the 41,600 full-time staff journalists working at the surveyed newspapers. 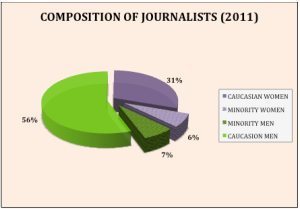 Caucasian women:  30% of all staff journalists

Minority women: 7% of all staff journalists

* Keep in mind that according to the US Census 36% of the population are minorites.

In 2010, the Global Media Monitoring Project conducted a survey on the contributions of women to news media in 108 countries.   Among other things, they examined the topics that women contribute to in newspapers, television, and radio and the ways in which they contribute to them.  Although GMMP has charted significant gains since its first study in 1995, they have held to their original observation:

“In no medium, region, or news topic did the female-male ratio approach parity.  Women’s visibility in the news was extremely and uniformly low.”

Interestingly enough, the 2010 GMMP findings on the distributions in topic matter contributions mirrored that of the OpEd Project research.  The chart below illustrates this tendency for women to contribute least to politics and economics, more to health, art, and education, and most to Pink Topics. 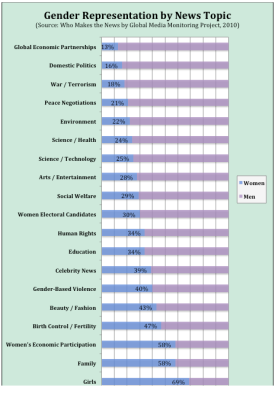 The chart below shows that as age increased both sexes were more likely to be utilized as experts.  Beginning at the age of 19 men were at least 11% more likely to act as experts and the gender gap increased with age.  The gap culminates in the age group of 65 or older, when men appear as experts 68% points more often than women do.  In this age group a woman is almost as likely to be used in the role of expert than a young man in the 13 to 18 age group. 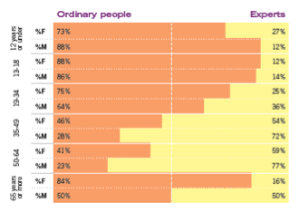 In the digital realm there are fewer statistics on new media production due to its decentralized and sprawling nature.

Enter The Gender Report!  The Gender Report has tracked gender representation in online news outlets* for the last 10 months by looking at one lead article in each of eight websites once a week.  They found that in the first 9 months of their survey women made up 38% of authors and 25% of sources.

I’ve also taken a look at blogging activity to get a sense of the gender balance of new media output.  A 2010 Technorati survey found that bloggers are predominantly male and more affluent and educated than the general population:

Researchers at Northwestern University found that in general, men are far more likely than women to share their work (be it writing, photos, videos) online, but when they controlled for “self-reported digital literacy” the gender gap disappeared.   The researchers concluded that the disparity was a result of “self perceived skill levels”.

On the consumption end of the news I tried to find the demographics of traditional and new media readership.  I would expect the contributors to an outlet to be reflections of the audience.

A 2003 study that examined newspaper readership correlations with age, residence, education, gender, and income concluded that, “The fraction of variation in readership accounted for by demographics is small, indicating that newspapers have a broad reach across demographic groups.”   In most of the newspaper markets that they studied, length of residence and age were found to be the strongest predictors.  These two variables were followed by income, which had a small, though positive association with readership.  There was almost no variation accounted for by education and gender.

As for the new media outlets that we have been tracking, 52% of The Huffington Post audience is female.  Caucasians are disproportionately represented, making up 79% of all readers.  It has recently added blog categories especially for blacks, Latinos, and LGBT voices, so I suspect those numbers will rise in the near future.  65% of their audience is college educated.  Salon’s audience is 56% male, overwhelmingly Caucasian (84%), and highly educated (72% are college educated).

In these two examples we do find a relationship.  According to our research, men have written about 64% of the articles at the Huffington Post and 78% at Salon.  When the final analysis of the Byline Survey is completed, we will be able to see whether or not women contribute more to the Huffington Post in all subjects, or whether they simply write more Pink Topics.

The OpEd Project continues to conduct its own Byline Survey and we will soon be delving into the class, race, and education of op-ed writers.  Stay tuned!

* As a reminder, “Pink” topics are the topical spheres that compose what some media critics refer to as the “pink ghetto” because women have historically been confined within them.

We’ve defined a Pink Topic as:  1.) anything that falls into what was once known as “the four F’s”: food, family (relationships, children, sex), furniture (home), and fashion, 2.) women-focused subject matter, e.g. woman-specific health or culture, 3.) gender / women’s issues, or 4.) a profile of a woman or her work in which her gender is a significant issue of the piece.